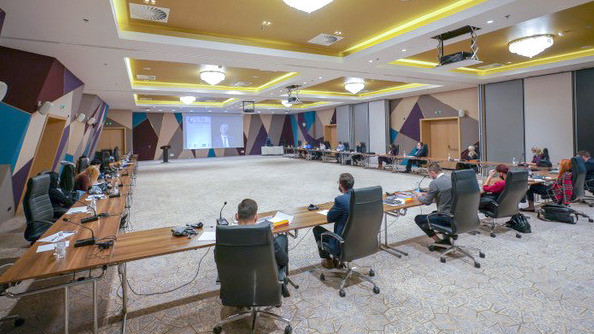 The 7th Regional Forum on the Rule of Law for South East Europe, taking place on 16 and 17 October 2020, brought together representatives of the European Court of Human Rights, the Council of Europe and judicial institutions from seven South East European countries. The topic of this year’s forum is “Covid-19 and the rights protected by the European Convention on Human Rights”.

“It is a lodestar of the Convention. Together with the basic principles of democracy and human dignity, it represents the legal and moral foundation of the work of the European Court,” said President Spano.

The participants were also addressed by the Commissioner of the Council of Europe for Human Rights Dunja Mijatović, who said that the health crisis has exposed and deepened long-term inequalities in the enjoyment of human rights.

“It is high time to bridge this gap and use the power of human rights as an effective remedy for society as a whole. This means respecting the transparency and availability of information, preserving effective protection mechanisms and recognizing the need for unity, solidarity and cooperation, both at the national and international level,” said Commissioner Mijatović.

At the central event, former and current judges and judges of the European Court of Human Rights talked about the rights from the European Convention that were affected by the pandemic, their protection and the situation in the Western Balkans.

At the same time, presidents and judges of supreme and constitutional courts from seven Southeast European countries gathered in the capitals: Belgrade, Podgorica, Pristina, Sarajevo, Skopje, Tirana and Zagreb. Together with ombudspersons, state representatives before the court in Strasbourg, representatives of judicial centres, faculties, non-governmental organizations and legal experts, they are participating in this event via a video link.

Vice President Ćeman said that it is the obligation of judicial bodies, institutions and public authorities to ensure the implementation of health measures in an environment that will not endanger human rights and freedoms guaranteed by the European Convention on Human Rights.

“The Constitutional Court of BiH, through joint projects with the AIRE Centre, which includes active participation in the annual regional forum, seeks not only to contribute to the affirmation and improvement of professional knowledge and culture of dialogue, and the improvement of human rights and freedoms in general, but in experiences with others, to contribute to the preservation of the health and life of the citizens of Bosnia and Herzegovina and all others who come into contact with them on any basis,” said Vice President Ćeman.

Ambassador Field stressed the importance of advocating for the protection of human rights in order to address the challenges posed by the pandemic.

Ambassador Vos stressed the importance of finding a balance between measures taken by states to protect the population and respect for human rights.

“Countries around the world and in Europe are facing an unprecedented challenge – they are trying to protect their population from COVID-19. The necessary measures taken by various states are inevitably in conflict with the values we care so much about. Failure to strike a fair balance between these measures and the protection of democracy, the rule of law and human rights is something we cannot afford. Simply because it is a question of what we are, what we value and what we have the right to as human beings,” said Ambassador Vos.

A judge of the European Court of Human Rights Faris Vehabović, in a statement given before the beginning of the Forum, spoke about the importance of this gathering. Vehabović said that the Forum deals with the perception of problems from the point of view of judges who start the process, all the way to the judges of the European Court who finish it.

“The role of the Forum is to make that process prompt, effective and fair, which could only be achieved through the exchange of information, ideas and, thus, better understanding of different stages a legal goes through. Through the process of understanding and gathering experiences from the regional countries, we learn from the mistakes of others and others learn from ours, pursuing a common goal – not to repeat the mistakes. For all these reasons, the Forum is a multilateral project deserving a special place in the annual activity plan of every judge in the region”, said Vehabović.

The forum provided an opportunity for Europe’s top legal experts to talk about the human rights threats that have emerged during the pandemic, and to provide solutions to these challenges.

The Rule of Law Forum for South East Europe is one of the most important annual events for representatives of the judiciary, lawyers and representatives of non-governmental organizations from the region. Its goal is to promote the implementation of the European Convention on Human Rights at the state level, encourage regional cooperation in the continuous development of the rule of law and human rights, and to provide assistance in the process of integration of the region into the European Union.