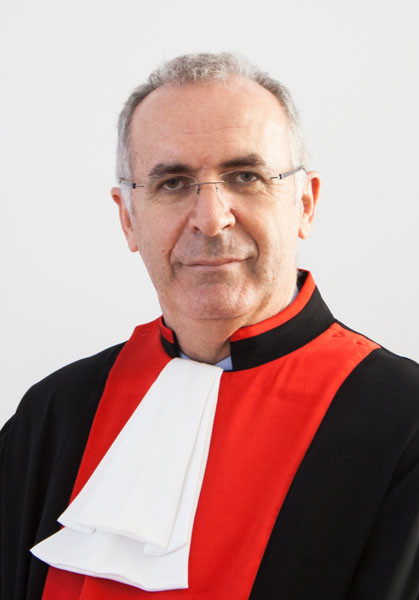 LEDI BIANKU
Judge
Born in Shkodër, Albania, in 1971. Obtained law degree from the Law Faculty, University of Tirana in 1993 and a LLM in European Law from the College of Europe in Bruges in 1997.  He was Associate Professor from 1993 at the University of Tirana on Public International Law and full Professor from 1997 at University of Tirana and Albanian School of Magistrates until 2008. He became member of the Tirana Bar in 1994. He also served as external advisor to President of the Republic of Albania, Albanian Speaker of Parliament and Minister of Justice and EU integration, on issues of EU law, human rights law and international law.  From 2006 to 2008, he was member of the Venice Commission for the Democracy through Law. From 2008 to 2009, he served as a Judge of the European Court of Human Rights and from 2016 to 2017, as the Vice-President of its First Section. Since 2018, as Associate Professor, he is teaching ECHR Law, EU Fundamental Rights Law, Migration Law, and European Health Law at the Law Faculty and Institute of Political Studies of the University of Strasbourg. He has been a Visiting Lecturer and has participated in many conferences at the College of Europe, University of Paris II (Pantheon Assas), European Law Academy in Trier, EASO, University of Kent, State University of Milano, Kosovo School for European Integrations, University of Luxembourg, University Jean Moulin (Lyon III), Catholic University of Louvain, University of Leiden, University of Neuchatel, etc. Since 2019, he is an Associate Tenant of the Doughty Street Chambers in London. In 2020, he was Treasurer of the René Cassin Foundation – International Institute of Human Rights, as the President of the Association of the René Cassin Foundation. From 2015 to 2019, he served as Member of the Nomination Board for Thomson Reuters. He is currently a member of the Ethics Committee of the Prince Albert II Foundation and member of the Board of Directors of AIRE Centre Ireland. He is one of the founders (1999) of the European Centre Foundation, a leading Albanian NGO on issues of human rights and EU integration.
He took the office of international judge of the Constitutional Court of Bosnia and Herzegovina in December 2021.