Contemporary communication technologies play an important role in prosecution of organized crime. However, the states have to prevent the abuse thereof and ensure the protection of human rights and freedoms, as said at the opening of the Sixth Annual Conference of the Judicial Forum for Bosnia and Herzegovina (BiH), held in the Jahorina mountain today and tomorrow.

The conference on the topic of Decisions on Organised Crime Cases – Use of Evidence Obtained by Contemporary Communication Technologies was organized by the Constitutional Court of BiH, High Judicial and Prosecutorial Council of BiH and AIRE Centre, and with the support of the United Kingdom Government.

At the opening of the Judicial Forum, it was emphasized that the technological progress advanced everyday life and that it created new possibilities of surveillance, communication interception and data retention. This sets new challenges for the legal systems aimed at the protection of the right to privacy.

Ms. Valerija Galić, President of the Constitutional Court of BiH, stressed that the use of contemporary communication technologies was very important for the prosecution of organized crimes, and that, it was necessary at the same time to prevent the abuse thereof.

President Galić stated that the use of communication technologies facilitates the work of the police, prosecution offices and courts in preventing, detecting and prosecuting organised crimes. However, the mission of the prosecutors and judges in such cases is anything but simple. Regardless of the criminal offence, the conduct of fair proceedings must be ensured from the investigation stage to the judgment stage. The attempts for abuse of modern technologies must be prevented regardless of who may try it, the prosecution bodies by its unlawful actions or defence.

Mr. Halil Lagumdžija, President of the High Judicial and Prosecutorial Council of BiH said that the topic of the Judicial Forum was significant not only to the judicial community but also to citizens who have great expectations when it came to the prosecution of organized crime.

President Lagumdžija stated that he believes that the judiciary is faced with the challenges of fast technological advancement not only in our country but also in the countries of the region and beyond. This includes the possibility of using contemporary communication technologies for the purpose of gathering evidence in criminal cases. In his opinion, this is, beyond any doubt, commendable, notably if the legislative framework keeps pace with that advancement.

Judicial Forum for Bosnia and Herzegovina has gathered judges and prosecutors of BiH, representatives of the State Investigation and Protection Agency, international organizations and judges of the European Court of Human Rights and lawyers.

His Excellency Julian Reilly UK Ambassador to Bosnia and Herzegovina said that the UK was pleased to have supported the organisation of this Judicial Forum hoping that the exchange of experience and good practice would facilitate the effective fight against organized crime.

We face new challenges. Whilst technological development has improved our everyday lives, it has also changed the way criminals operate. This poses numerous challenges for criminal justice systems. Judicial actors, in BiH and elsewhere, must adapt urgently, both to avoid confusion and to ensure even more effective action against serious organised crime and corruption, said Ambassador Reilly.

Ms. Biljana Braithwaite, Western Balkans Programme Director at the AIRE Centre emphasized that the use of evidence gathered by means of contemporary communication technologies was one of biggest challenges the contemporary criminal justice law was facing.

Program Director Braithwaite stated that this is the reason why there should be a conversation within the justice system community about the standards of use of evidence obtained by means of contemporary communication technologies. In addition, there should be conversation about the lawfulness of such evidence and stages of the procedure to determine it, but also about whether the current legal framework enables efficient fight against organised crime. This is so as the organised crime is exceedingly adaptable to new trends, including sophisticated communication methods.

The panellists of the Judicial Forum will continue discussion of the lawfulness of evidence obtained by means of contemporary communication technologies at different stages of the criminal proceedings. During the second day of the Conference, the participants will be presented the activities and reports of different international organizations, which relate to the cases of organized crime and corruption, and evidence gathering.

The aim of the Judicial Forum for BiH is to promote the implementation of the European Convention on Human Rights, foster cooperation among the highest courts on the continuous development of the rule of law and human rights and facilitate accession process of Bosnia and Herzegovina to the EU. 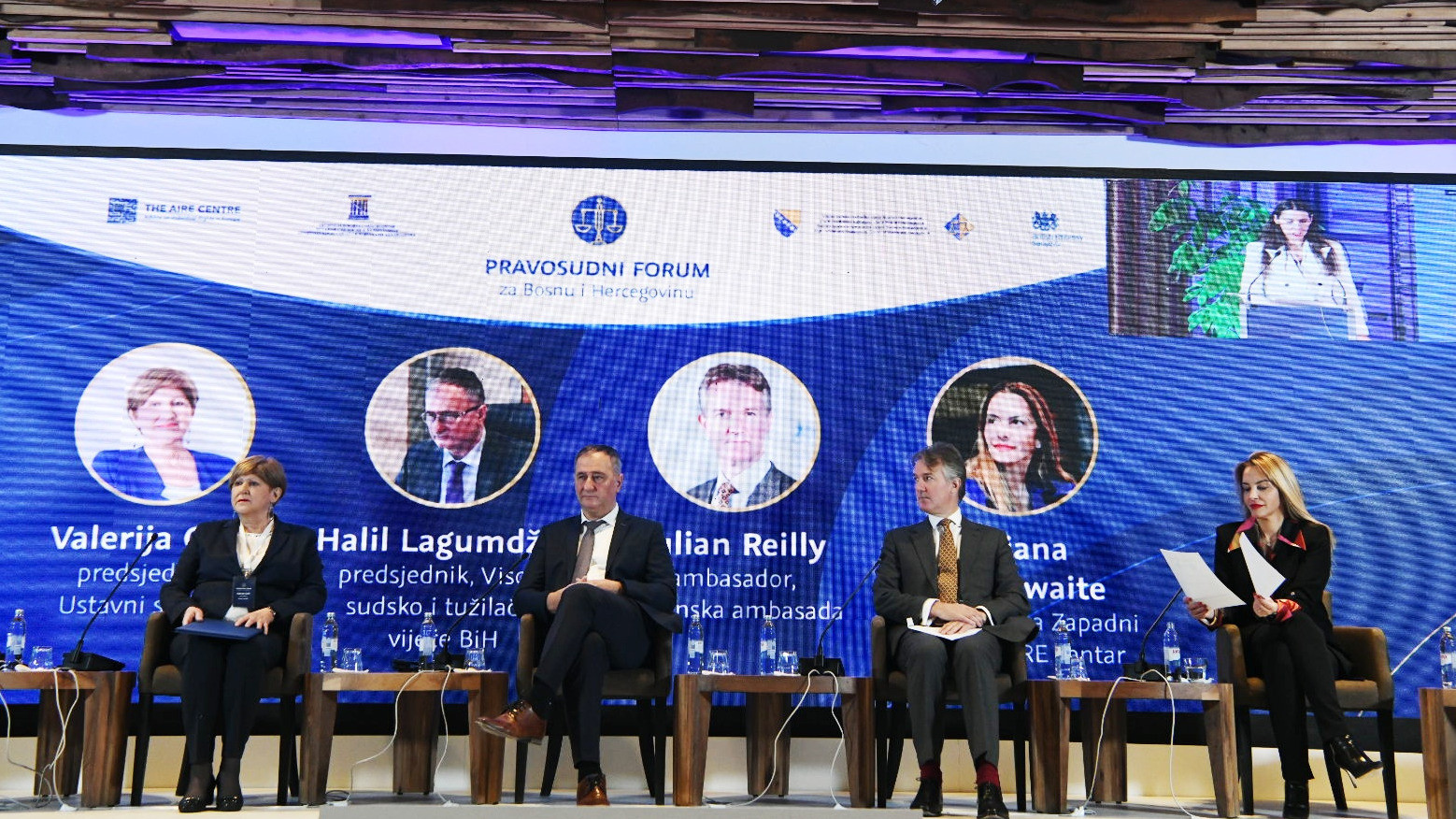 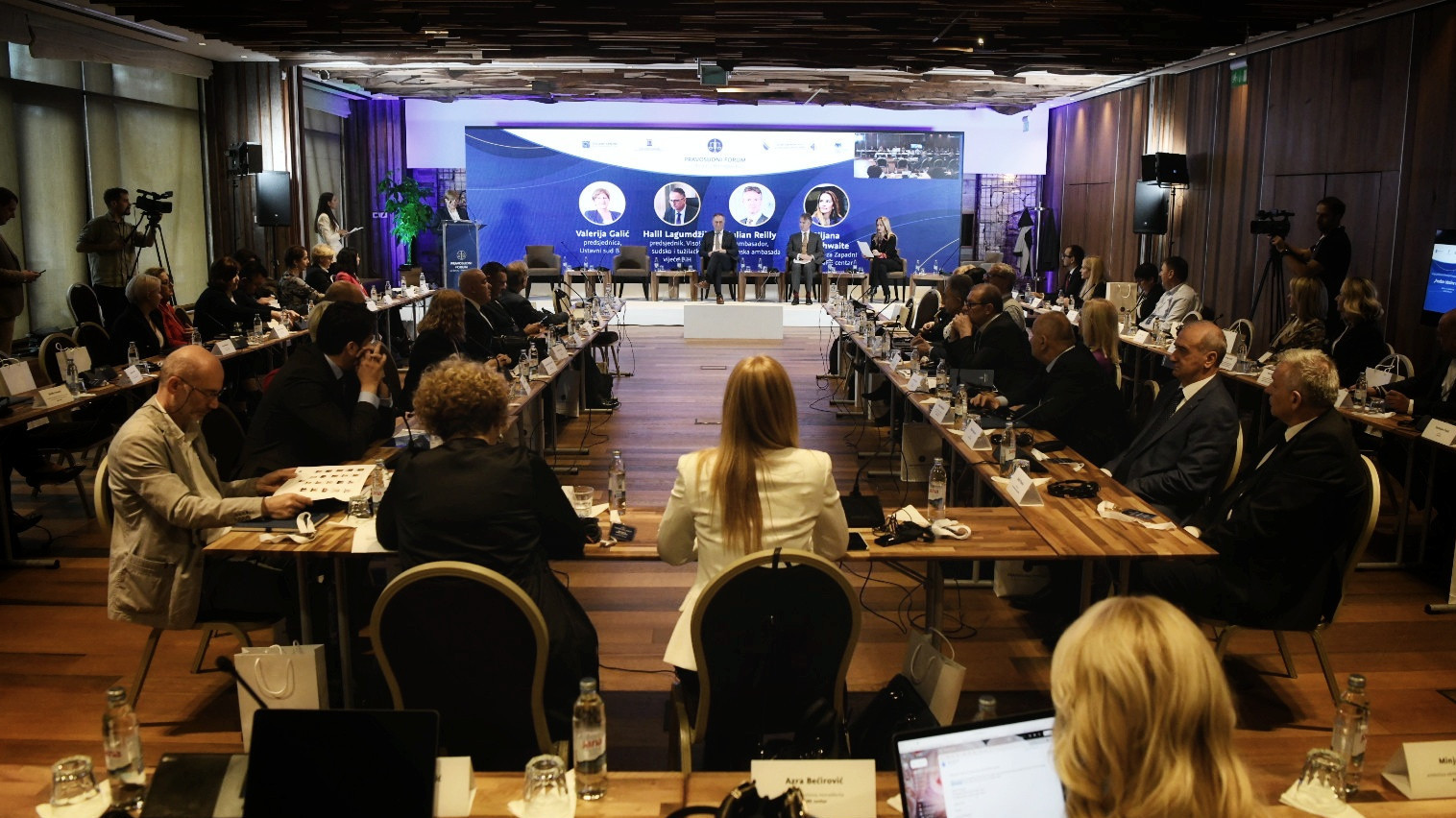 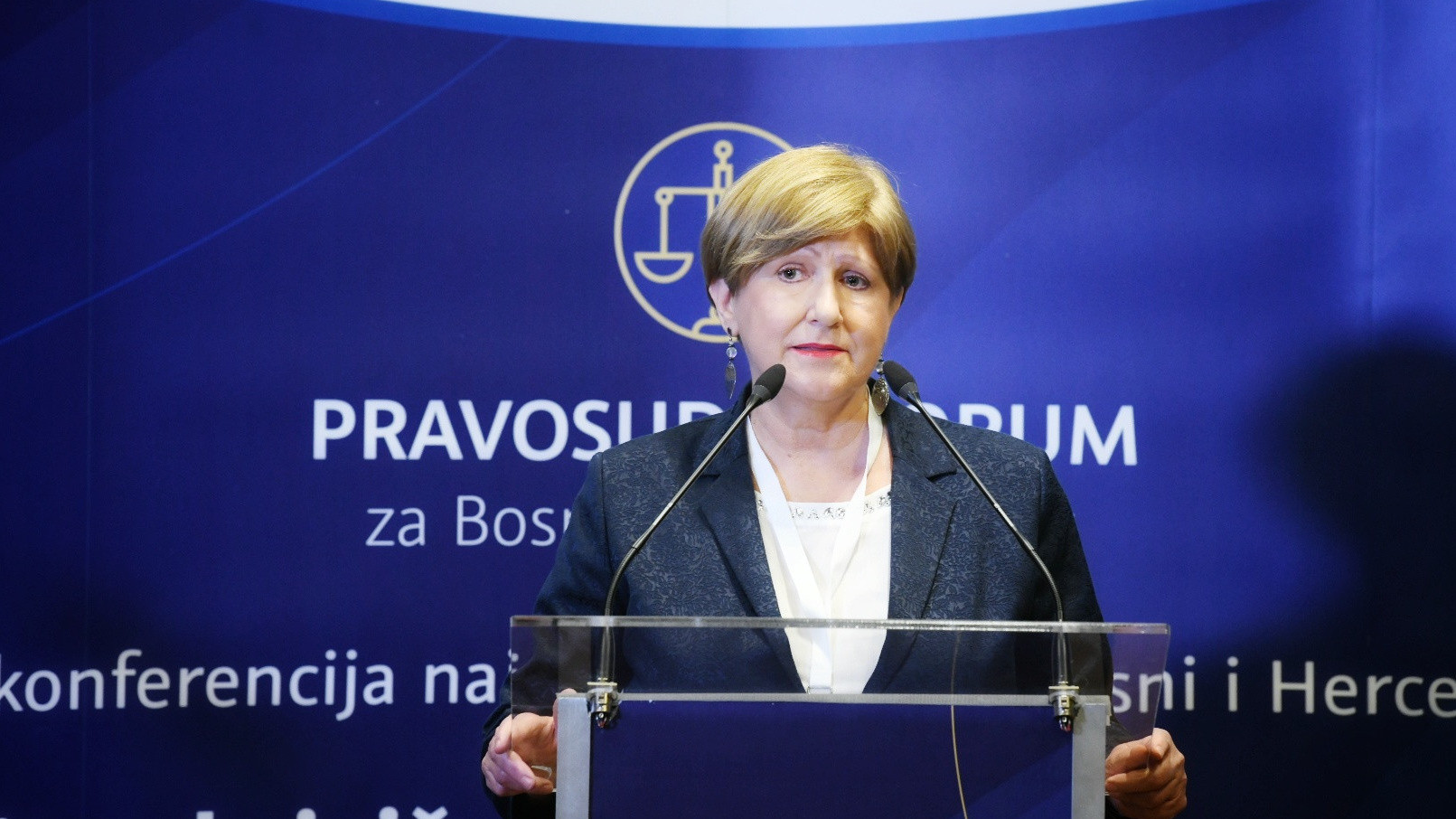 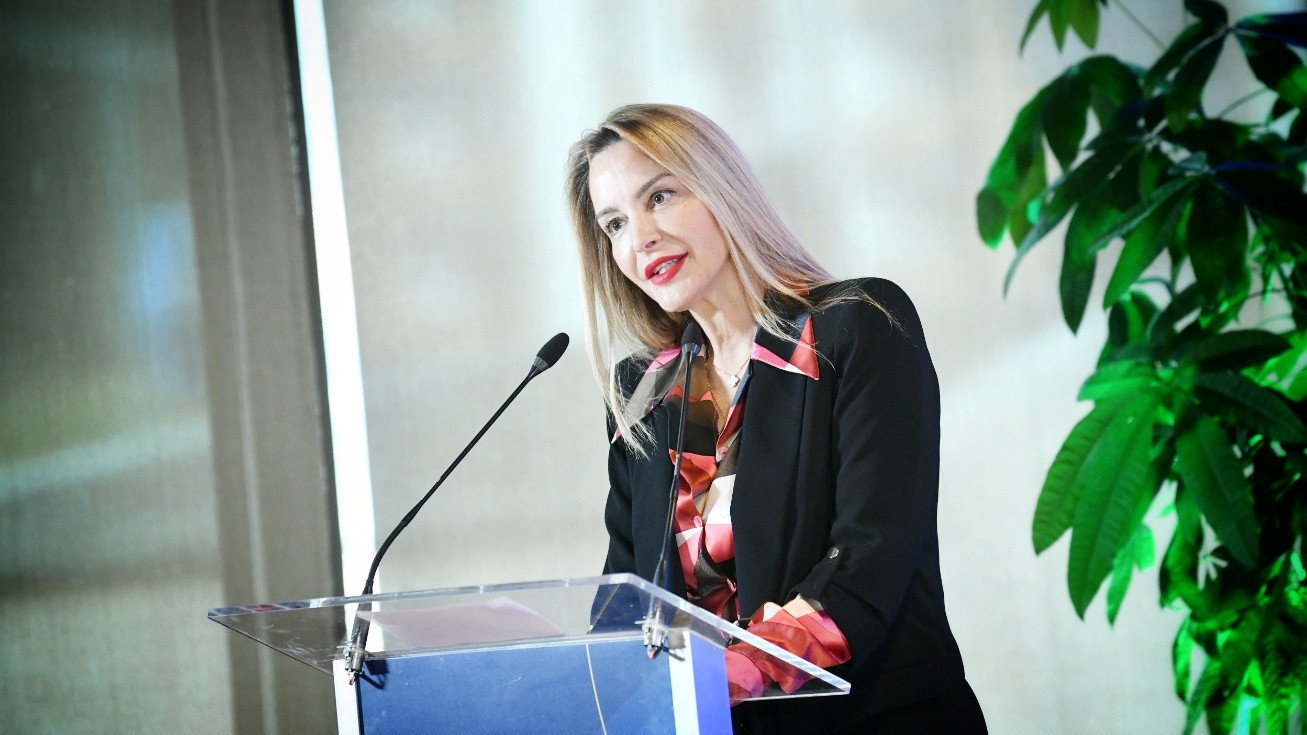 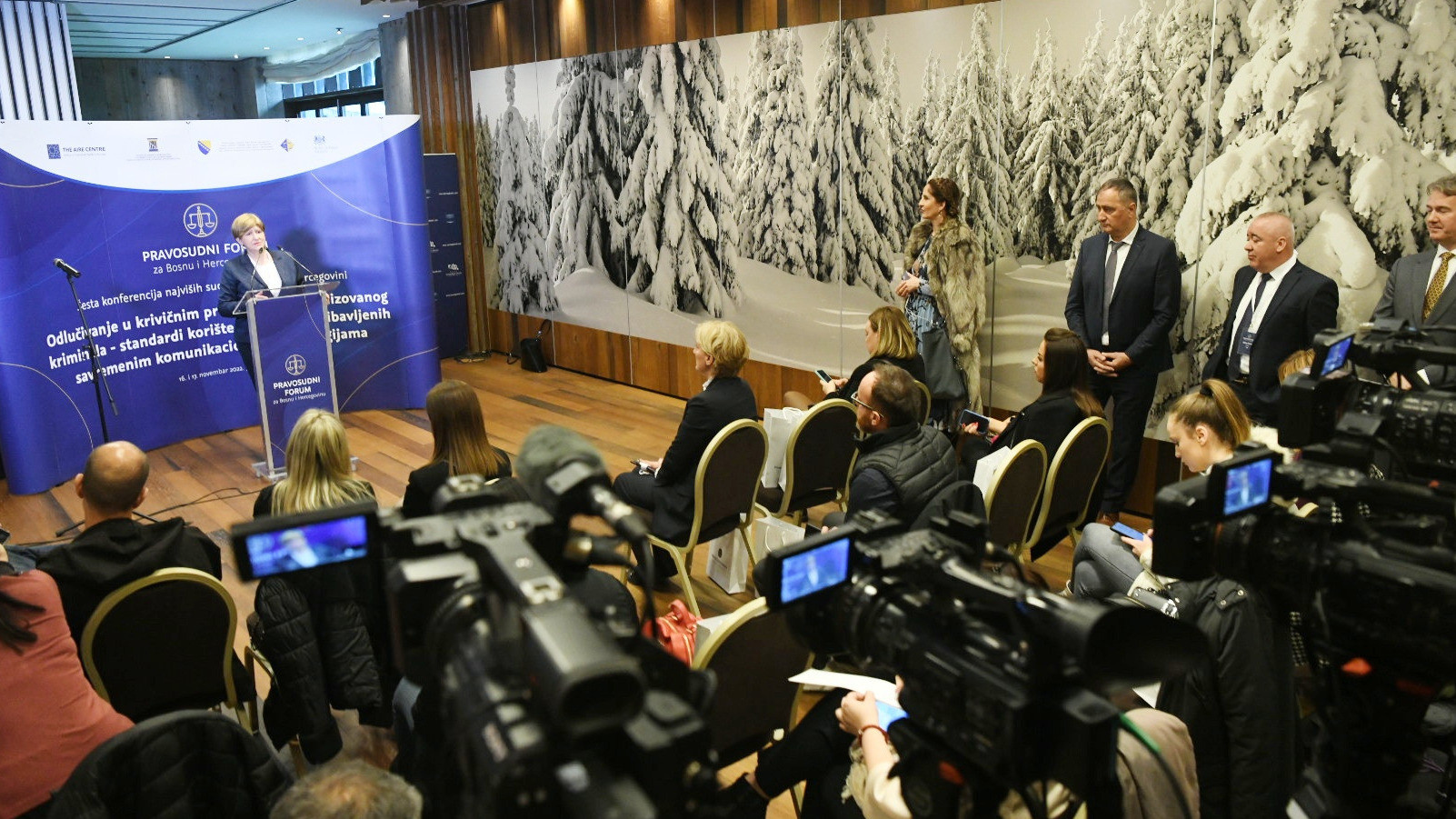