Third Annual Conference of the Highest Courts in Bosnia and Herzegovina 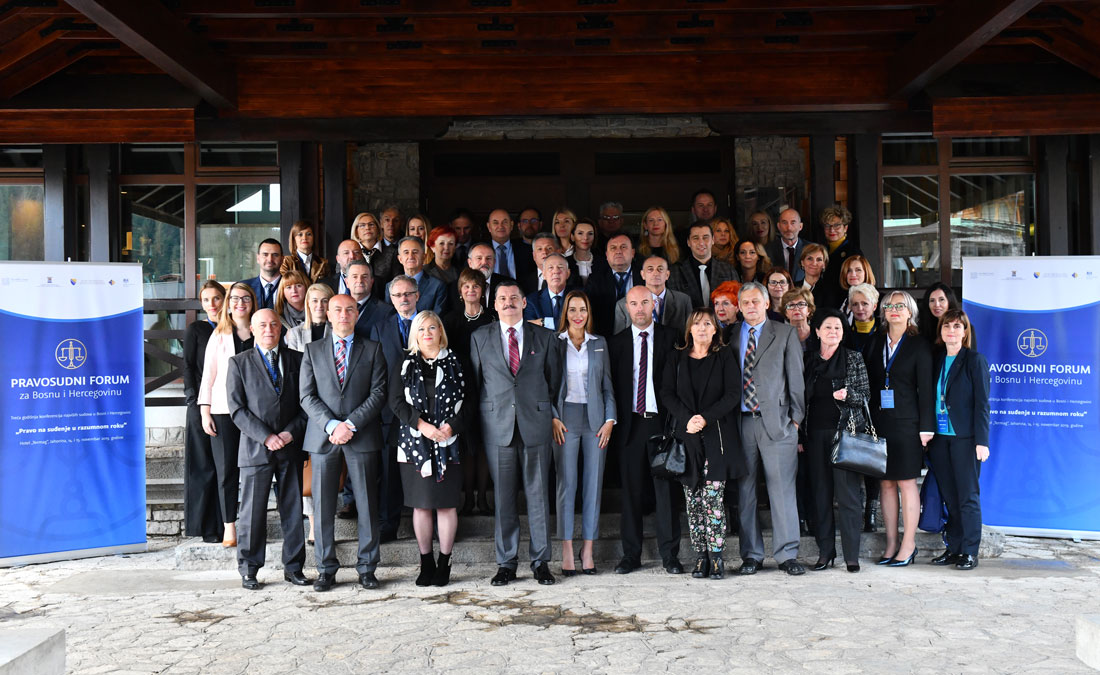 The topic of this year’s Judicial Forum was the Right to a Trial within a Reasonable Time. The participants discussed the European Court of Human Rights (ECtHR) standards, and the civil and criminal law aspects of trials within a reasonable time, with particular focus on BiH case-law.

In the view of Zlatko M. Knežević, the President of the BiH Constitutional Court, “The contribution of today’s Judicial Forum and this topic is twofold: first, it provides the domestic judges with the opportunity to hear more about the Strasbourg Court’s and comparative case-law and to discuss ways of addressing overly lengthy trials. On the other hand, the judges have the opportunity to discuss potential legislative solutions to this problem in the presence of the Justice Ministers.”

“The rule of law is crucial in every democracy. This is why the United Kingdom is proud to place the rule of law at the centre of its relations with Bosnia and Herzegovina, because it is essential that your citizens, your companies and your potential investors see that no-one is above the law[d1] ,” British Ambassador to Sarajevo HMA Matthew Field emphasised the following in his opening remarks.

The Right Hon Lord Reed, the Deputy President of the Supreme Court of the United Kingdom, said the following about this opportunity to meet with BiH judges again: ““It is a great pleasure for me to return to Bosnia and Herzegovina and to spend time again with the judges discussing matters of common interest, including the transparency of court proceedings. Our experience in the UK is that ensuring the transparency of the courts is one of the strongest safeguards of an independent justice system, and helps to sustain the legitimacy of the democratic institutions that independent courts protect and support. We have taken many steps in recent years to improve public access to court proceedings and to make court decisions more accessible to the public, so that the public can see and understand how justice is administered. This is, I think, a matter of importance to all democracies. While international law has an important role to play in helping to monitor and assist the development of the rule of law, only the democratic relationship between a country’s citizens and its institutions, including its courts, can safeguard the rule of law and sustain an independent and impartial judiciary.”

“The AIRE Centre is honoured and privileged to again co-organise the Judicial Forum, which is an important part of our extensive justice-related activities across Bosnia and Herzegovina. Respect for the right to a fair trial within a reasonable time is in everyone’s interest. It is in the interest of the citizens, who are looking for prompt protection of their rights. It is in the interest of the State, which thus avoids being branded as a country having a poor human rights record and the costs it may have to cover when the Strasbourg Court rules against it. It is also in the interest of the Strasbourg Court and pursuit of the effective enforcement of the European Convention on Human Rights at the national level,” said Biljana Braithwaite, The AIRE Centre Western Balkan Programme Manager.

The Judicial Forum was attended by over 70 professionals, including ECtHR judges, UK Supreme Court Deputy President The Right Hon Lord Robert Reed, representatives of the highest BiH constitutional and regular courts (the Court of BiH, the entity Supreme Courts and the Brčko District Court of Appeals), members of the BiH High Judicial and Prosecutorial Council, representatives of the Justice Ministries, international organisations and other eminent lawyers.

The Judicial Forum for BiH was organised with the support of the British Government with a view to improving the enforcement of the European Convention for the Protection of Human Rights and supporting the BiH judiciary in the process of aligning its case-law and the EU integration efforts.